I often describe the LP as “training the brain to respond appropriately rather than historically”.

In a recent Scientific American article on the brain’s role in peripheral immune function –
“The BRAIN had retained some sort of memory of the infection & was prepared to reinitiate the fight”.

“Many intestinal disorders are triggered by stress or strong emotions. The researchers think this causes neurons in the insular cortex to misfire, REACTIVATING an immunological memory & triggering a misguided immune response”

Interesting! Many people I work with trace the start of their issues to a virus (commonly Epstein Barr for ME/CFS) and now we are seeing long covid play out around the world.

This perspective allows us to move away from management and towards retraining the brain to respond appropriately rather than historically.

This “Neuro Nugget Video” is on Stress Hormones and the Brain and how they are both intimately linked to our relationships and our health.

Flourishing health often requires a re-assessment of relationships (past & present) but there is one relationship that is often forgotten.

What’s your RELATIONSHIP with your symptoms?  Your body? Your thoughts? Your mind?

This important concept is associated with those who make the move from stuck in their health to flourishing.

Another in my Neuro Nugget Video Series.

If you are interested in a brain based approach to health, it will help to remove the biggest myth about the brain. Enjoy.

Welcome to the first of my Neuro Nugget Series.

I sat down with Adam Stanecki for his Digging Deep Podcast recently and chatting all things pain, fatigue and fear.

October 8, 2021IanChronic Pain/ FibromyalgiaComments Off on

Like a lock & key, morphine fits into a special receptor & click, it works it’s magic on pain. BUT the ‘lock’ inside you that morphine works on isn’t actually made to be opened by morphine (or other artificial opioids). What’s the real KEY?

Like Dorothy and her magic slippers that were with her the entire time, you are walking around with the real KEY – a  substance 40 times more powerful than morphine because it’s an exact fit for the ‘lock’.
ENDORPHIN!
Tapping into your internal medicine cabinet needs no prescription and has no side effects. 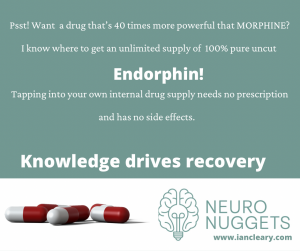 Another research study was published about the Lightning Process.

It is a mixed methods study of the effects of the Lightning Process on cancer survivors with chronic fatigue and has shown promising results.

Chronic fatigue is a severe side-effect commonly experienced by many who have recovered from cancer.  It is often debilitating and unresponsive to treatment.  The Lightning Process was evaluated as a potential solution for this issue due to previous promising evidence concerning its effects on fatigue.

This study found statistically significant improvements for all the patient-reported outcome measure (PROM) questionnaires comparing the pre- and post-intervention periods, with a significant reduction (p < .001) in the total fatigue score from baseline to 3 months and six month follow-up. This was reflected in the qualitative findings of the interviews where ‘participants emphasised that they now experienced both less fatigue and explicit improvement in their energy level’.

All 11 participants confirmed that the intervention had not worsened their health or caused them any negative side effects and that they were satisfied or very satisfied with intervention.  They also expressed that during the LP they felt they were ‘finally being taken seriously’ and the researchers noted how the LP course explicitly validated the participants’ symptoms as being real rather than ‘imagined’.

The researchers noted that ‘The reductions in the participants’ total fatigue scores were remarkable, since no changes in their overall level of fatigue, as subjectively expressed by the participants themselves, were reported over the preceding years.’

August 16, 2021IanChronic Fatigue Syndrome & ME, In the News & Research, NeuroplasticityComments Off on Post Cancer fatigue

I recently wrote an article on the nature of fatigue and the idea that fatigue / tiredness is not a lack of biological energy, but rather a form of protective response to a perceived threat.

With the brain being plastic and changeable with experience, a past threat can seemingly alter brain function to maintain the protective response of fatigue well after the threat has past.

Hence we get Post Viral Fatigue long after the viral threat has gone. Real fatigue, just no longer appropriate.

A common issue for those who have survived cancer treatment is Post Chemo fatigue. Does the same principle apply for Post Cancer Fatigue?

A paper came out in the journal Cancer today asking the question:

What Choice Do you Have?

August 13, 2021IanChronic Fatigue Syndrome & ME, Chronic Pain/ Fibromyalgia, Neuroplasticity, Success StoriesComments Off on What Choice Do you Have?

Summing up the Lightning Process

A while back I emailed many of hundreds of graduates who had taken one of my trainings over the last 13 years. I gave them this challenge.

Sum up the Lightning Process in one word.

I knew it was a big ask, as we cover so many things over the 3 days – both practical skills and information.

Graduates summed up the Lightning Process with that simple word.

When we are stuck in our health and lives, by definition we’ve run out of choices. We are stuck. It doesn’t matter what we try, we stay stuck. We might try something that works a little or works for a little bit, but before long you find yourself back there – you’re STUCK.

From a brain retraining perspective, the Lightning Process shows people where they DO have CHOICES.

Choices based on understanding how the mind and body interact to influence our health.

By consistently choosing to choose deliberately, we can retrain the brain.

From stuckness to ……..? Well that’s the point. It’s a choice what the life you love actually looks like.

Some use the Lightning Process to get their dream job back. Some go on to change their career. Others go on to work and earn for the first time ever. Some go on to love their daily run on the beach, train for a marathon or go on hiking trips. Others simply choose to get to a point where they can easily lift their grandchildren, have the focus and energy to have friends around or simply to have the capacity to be there for others for a change. Often it’s simply having the energy and focus to enjoy their days rather than just getting through them.

When you are stuck, even more than ever, recognising that you DO have choices is a powerful part of making change.

Neuroplasticity shows us that the brain is incredibly flexible and adaptable. With deliberate and focused effort designed to engage the adaptive power of the brain, people can go from stuck to flourishing.

What choice do I have?

You could simply start by choosing to be willing to look at your situation differently.

You could choose to be involved in forums that are negative, all about management or that promote hopelessness – that’s a choice. There are others forums and websites around devoted to telling stories of people who have recovered from conditions such as FIBROMYALGIA, CFS/ME, CRPS, anxiety, depression, PTSD. Not just managing it well – Recovered.

The Norwegian Based Website Recovery has many many wonderful stories of ME/CFS recovery stories to choose from.

There is a power in every deliberate choice. Choose wisely.

“CHOICES are the hinges of destiny”. Edwin Markham