Cute rabbits, perception and the brain

October 23, 2015IanChronic Pain/ Fibromyalgia, In the News & Research, NeuroplasticityComments Off on Cute rabbits, perception and the brain

What can a fake rabbit teach us about neuroplasticity and the brain? 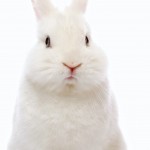 There is a neat experiment known as the cutaneous rabbit illusion. If you tap two spots at distant places on your forearm in a particular timing, you experience the sensation of being touched in the middle of the two places as well. The brain incorrectly senses an extra location of sensory input.  (The name comes from the sensation of a rabbit hopping up your arm).

It’s a cool party trick, but what is really interesting is when it happens under a brain scan because you see how the brain is reacting. The brain responds AS IF it is really being touched in the middle location as well. The corresponding parts of the brain for the area that feels like it is being touched (but is not) is being activated. Over a period of time the brain and nervous system would undergo changes to adapt to this experience. The brain maps that make sense of the body would change AS IF it were being repeatedly touched in that middle location.

Interesting if you are a nerd like me but how does this relate to YOU? Well it highlights that the brain is not responding to what is actually happening but to what you perceive is happening. This finding is really important and highlights the importance of perception.

A phobia is produced because the brain perceives threat. You can logically know that mice/clowns/tulips aren’t dangerous but your brain is responding AS IF they are. Phobia’s are a brain processing issue not just ‘fear’. Luckily the brain is adaptable so you can train someone out of a phobia really quickly (and into one if you are feeling particularly nasty). It turns out that the brain isn’t that smart but it is great at trying to protect us. It can sometimes get it wrong. 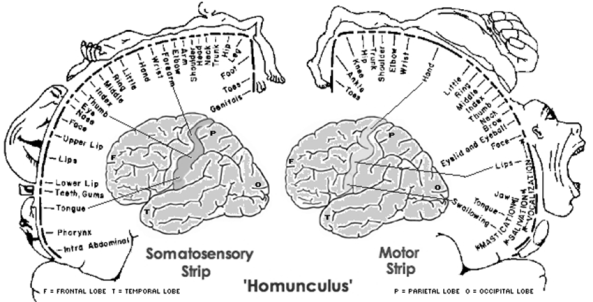 For pain this is important as chronic pain is often linked to an altered and inaccurate perception of body parts in the homunculus or the brain’s map of the body. In brain science we would call it altered somatosensory representation in the cortical homunculus but in every day speak we would say the brain’s map of the body is not an accurate reflection of what’s going on in the body and so it starts to respond inappropriately.  Interestingly people in pain will often talk about parts not feeling like their own. Others will be unaware of their altered body perception until tested in clinics ( e.g. two-point discrimination test). That’s the thing about altered perception…. you won’t know there is a problem with your perception because you perceive it as correct.

For the brain to properly oversee and control our bodily functions it is critical it is getting accurate information about what is going on down there. If it gets it wrong the consequences can be severe. The brain can also ‘misinterpret’ a body part AS IF it is broken or damaged or even in the wrong place and turn on pain/inflammation/swelling.

Phantom limb sensation is a great example of when the brain is responding, not to what is happening but what it perceives to be happening. People can experience pain or stiffness in a limb that isn’t even there. Chronic Pain can occurs through changes in this brain map so it inappropriately is interpreting that a pain signal is appropriate.

So actively changing / correcting how the brain perceives the body can alter the brain’s responses including pain messaging. This is the basis of many chronic pain approaches like mirror therapy, visualisations, and new altered reality glasses for pain.

You can watch a novel way to address it with altered reality computer imagery here.

The idea that the brain is responding to our perceived reality also explains why many chronic pain approaches prioritise looking at a person’s beliefs around pain and movement.

So sometimes part of the brain retraining is around retraining perceptions or beliefs.

The reason why I love taking people through the rubber arm illusion is that it highlights some important concepts:

1. The brain maps can change and adapt really quickly

2. It is really easy to for the brain to ‘get it wrong’

3. If the brain get’s it wrong this is NOT an indication of  a psychological issue –  just a highly adaptable and protective brain.

Luckily it is changeable both into and out of pain.