The way the LP views conditions like CFS was unlike anything I’d read online, but to me it was the most logical.

Doing the Lightning Process was one of, if not THE, best decision I’ve ever made in my life.

This is my story.

In January 2015 when I was 28, I caught a virus during a period of stress (I’d been dealing with depression and a stressful master’s programme in a foreign country). I didn’t see a doctor at the time, so it’s impossible to know exactly what it was. In any case, it was similar to the flu – bedridden for several days, sore throat, fever, fatigue, aches, etc.  Following that I had what was probably post-viral fatigue for several weeks. The fatigue faded and, with therapy and medication, so did my depression. I’m mentioning the depression here because I know CFS patients are frequently misdiagnosed with it, but having had both (before and during CFS), I can say for certainty that they feel very different. I also suffered from secondary depression later on when my fatigue worsened in 2016, but as by that stage I was able to recognise it quickly, I sought help fast and it passed within a few months.

Throughout 2015 and early 2016 I was “more or less” back to normal. There were just some things that were a bit strange. For example, I couldn’t exercise as hard as before without feeling sick or dizzy. I also sometimes had short periods of fatigue which would typically just last a few days, as long as I immediately stopped what I was doing and rested.  At the beginning of April 2016, I started a new job and the fatigue started again at exactly the same time. But this time it didn’t go away. Even when I took some days off and properly rested, it only abated somewhat – it didn’t disappear. It was the beginning of the push and crash cycle. When I say “fatigue” I’m actually referring to a range of typical CFS symptoms – physical fatigue, brain fog, muscle aches and some sensory sensitivity. I also sometimes experienced dizziness, headaches and mild sore throats.  In July 2016 I moved back to Australia from France so I could live with my parents. After a few months I was pretty sure I had CFS, although I was only officially diagnosed in early 2017.  I was thankfully never bedridden – I was always able to get up, have a shower and get dressed – but I wasn’t able to work and my activity levels were drastically reduced. I’d describe my CFS as mile to moderate.

Like most people, I tried many things to recover: dietary changes, supplements, pacing, etc. I even dabbled in cold water therapy. With pacing I was able to even out the push and crash cycle a little, but although I often told myself and others that I was making progress, I frequently felt like I was going backwards. I tried to stay optimistic, but needless to say there were many moments of frustration and helplessness.

I believe I first heard about the LP in 2017. I admit I was sceptical of it, but every now and then I briefly looked into it. I then tried a different programme in 2018 which some people said was similar, and was also cheaper and could be done at home. It didn’t help much. At the beginning of 2019, my interest in the LP was piqued again after coming across more LP recovery stories online. It was also around that time that I received an email from Ian saying that he was starting training sessions again after being on leave. (At some stage, I’d signed up to his mailing list.) I got in contact and did the course towards the end of March.

The course was a complete eye-opener and I’d also say a paradigm shift for me. The way the LP views conditions like CFS was unlike anything I’d read online, but to me it was the most logical. There’s absolutely nothing “mystical” about it (I’m an atheist and also quite critical of many “alternative” therapies) – it’s based on the power of the brain and how the mind, brain and body interact.

Within three to four weeks of doing the course and applying the techniques, I was symptom-free. I sometimes found myself crying, but they were no longer tears of frustration. They were tears of relief and joy. I honestly would’ve been delighted if it had taken six months. I never expected it to happen that fast.

I wasn’t entirely back to normal yet. Unsurprisingly I was very unfit and had lost a lot of muscle after not doing much for three years, but I was able to go on long walks, go to dance classes, work for several hours a day and socialise without looking at the clock. I also slowly built up my fitness and strength to what it was before I got sick.

Now a year has passed since I did the training. I’ve admittedly had a few “wobbles”. On three occasions over this past year some of my CFS symptoms returned for a few days. But these periods were very mild compared to the crashes I experienced when I was sick. I just continued to live my life as normal and started using the techniques again. After a day or two of regularly doing the techniques, the symptoms passed completely. I think this is important to mention because one thing that people who recover from CFS often worry about is “relapse”. I no longer worry about it because I know that if it happens, I’ll be able to get myself out of it.

Although my primary reason for doing the training was to recover from CFS, it has also helped me emotionally. I truly believe that I’m a lot more resilient than before, and a lot of that is due to what I learnt during the training.

I feel like I am now living a full life. Saying that the LP changed my life would be an enormous understatement. I have no idea where I would be without it. 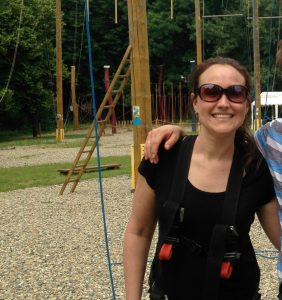