Ita’s Story – Age is no barrier

“Ita, I have never seen you out walking before”, so I replied that “this is a new beginning”.

In 1998, fourteen years ago I was enjoying retirement to the full. I had started golf, was learning to play bridge and making the most of the freedom of being able to plan my day, doing just what I wanted to do.

My sister in Auckland, New Zealand, asked if I would care for her grandson [nearly 2 years] for 5 weeks while she was in the U.S. with her husband. I was delighted to be asked and all was arranged.

During the time of caring, I became involved in a very stressful situation and also picked up a very bad virus, and so it seemed like hard work at the time. However, the time spent with Eli was delightful, as he was a bright, happy, good child, and we became firm friends.

Some weeks after arriving home, I noticed I was tired but didn’t think too much about it. However, the tiredness continued and I thought that I must be getting lazy.

Two years later, my sister again asked if I would care for her grandson for another 5 week period and again I agreed, on the proviso that she brought him here to Melbourne.

While he was here with me, I booked him in to a childcare centre for two days each week so he would have children of his own age to play with. On these days I would take him to the care centre about 9a.m. and I would come home, go back to bed and get up when it was time to pick him up again about 5p.m. We both enjoyed the time together, as he was such a good child.

After this time I knew the tiredness was not natural, so I went to a physician who listened to my symptoms, did various blood tests and after several consultations and tests, no conclusions were reached.

It was so frustrating and for the first time ever, I sought a second opinion. Again I confronted another physician with my symptoms and after listening to my story he said “I think you may have Chronic Fatigue”. At that time I had never heard of Chronic Fatigue, and so knew nothing about it. Again he did tests mainly to eliminate other diseases, and so the long journey commenced.

I tried Neurologists, Naturopaths, Physiotherapists, G.P.’s.,  Program Maintenance and other treatments, but nothing seemed to work. I was prescribed a medicine that gave me some  stimulation and enabled me to be a little active, but there were days when I didn’t have the energy to collect the mail from the driveway, which, living on my own, presented a problem. When out shopping for groceries I would park as near to the intended shop as possible and if needed, drive half a block to the next shop. I could only manage one chore a day, then I would be completely exhausted.

In December, 2011, I was given Ian Cleary’s website and contacted him that day. There was a constant stream of communication between us, until I commenced in a training class in April,2012. We had been informed that a usual day in class was from 9a.m.to about 3.00p.m. I was apprehensive about the ability to stay alert in the class, as for years I was unable to function to any great extent from about 11a.m. or mid-day on any day.

The first day in class, Ian outlined the programme and after a few formalities we started a new regime. It all seemed new and exciting and when we looked at the clock at finishing time. Driving home in peak hour traffic was something I hadn’t done for years. However, this day, I was so relaxed, I let cars in from side roads, and looked at all the beautiful buildings along the way, which I had passed a thousand times, but had never seen before. Oh, how different today was, and I was not aware of any changes that I had made.

On arriving home after 5p.m. I wanted to go, and went for a walk, something I had never done before. I met one of my neighbours and she said “Ita, I have never seen you out walking before”, so I replied that “this is a new beginning”.

The three days passed so quickly and before we realised we were ready and able to put training programme into practise.

It is now over 6 months since that time, and I can honestly say I have never been able to cope with any eventuality in such a relaxed way. The communication, feedback and advice, has been so efficient and speedy, that I never felt a long way away from a trusted and reliable practitioner, who could say just a few words to put me back on track. Nothing appears to confront Ian, and I have been so impressed with the ability with which he operates. At times when I had not contacted him, I would go to my emails just in case he had sent one to me. Previous to this time, I may not look at the emails for 6 weeks or so.

Ian had stated many times that the client has to do the work, but after the training period we had the ability to succeed and it does need constant work. However, I have never been so happy within myself and I strive to achieve more each day and week. I have started back at the golf club, have just started back at bridge and have entertained family and friends again. Skydiving was added to the list of activities I want to achieve, but I still have to work on that.

Since completing the programme, I have recommended the course to many people, as I know they could be helped to lead a happy and normal life again, with no physical effort. However, there have been friends who have a closed mind and think that their situation is different, so no amount of talking would change their mind. I just feel so sorry, considering the happiness and joy I have received from the Lightening Process training, so they won’t be able to achieve the same result, mainly because as the saying goes “only the learner can learn”. A thousand thankyou’s to Ian for your dedication, and for all you have done for me and so many others. 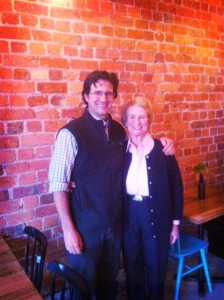 Catching up for coffee 2 years after the training!